As well as having a rich literary history, Cricket has always had a vast visual culture that has probably not been as heavily explored.

Whilst thumbing through stacks of old cricket magazines as I continue to pack up the house, I decided to put our new scanner to use and create a post on the visual history of cricket marketing.

I've split this up into three decades; the 70's, 80's and 90's, primarily because they are the era's for which I had the most material, but also because they're the most interesting for this topic. This is not a definitive list by any means, as I was limited to the contents of those mags I'd held onto.


It also allowed me to lessen my guilt about essentially holidaying as my girlfriend slaved over a Master's essay on the human rights of Indigenous Peruvians. I am under no illusions as to the respective importance of our projects, but at the very least it's legitimized some of my magazine collection to the point where I can justify keeping them, and boxing them up for our move. A win.

Anyway, what you'll see here is a sharp transition from the dowdy world of test cricket prior to the Packer insurgence, as seen through the eyes of the marketeers and advertisers. I have chosen not to include video items as I think it is sad enough for a grown man to sit scanning photos of Doug Walters on his holidays, let alone trawling YouTube for hours.

1974 - Kookaburra (NB. I think all photos can be viewed larger by clicking on them)
Before Kerry Packer came along, the marketing people had a pretty clear idea of what Cricket was and what it meant: fusty traditions and bad puns. This one falls into the first category and was an oft-repeated trope in cricket advertising; the cricket gear montage. This method also didn't require paying or sponsoring a player, which as Channel Nine showed us in their fearless documentary 'Howzat', was pretty much what it was all about before Packer came in and saved the entire world.

And yes, Kookaburra "always make the test team" because there is a contract written in blood somewhere that we're never to allow the Duke ball into Australia, not even to prepare our batsmen for it hooping around in the Ashes. It's surprising that this tradition has lasted so long given CA's fear of the old. 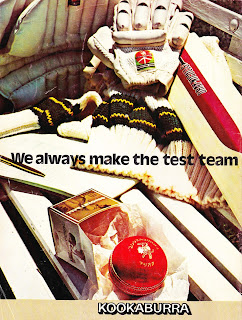 1974 - Stuart Surridge
This is a also a pretty classic example of what passed for a cricket ad in the pre-PBL days; a cliched vision of cricketers as an extension of English aristocracy, as though playing cricket was just a weird affectation suffered by Count's and Duke's. 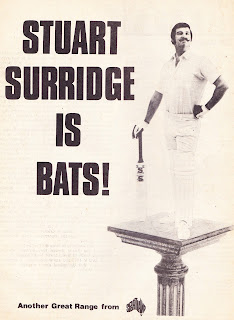 1974 - St Peter
This is the kind of crass commercialisation that the old-school cricket administrators were looking to stamp out. Look at these vile trade unionists! I mean, the way Ross Edwards is leaning on that SP bat in his neatly pressed whites, he's probably about to march down Jolimont street with a placard at any second. 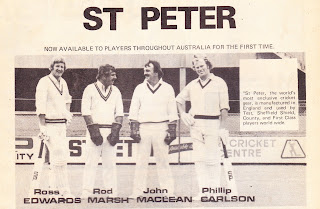 If ever there was a time to promote the use of a razor, it was mid-70's Australian cricket. We can't rule out that this ad was partially funded by the Don and Neil Harvey in a failed attempt to rid the Test team of handlebar mo's. Also a quaint reminder of the time when Gillette didn't feel the need to have 74 high-performance blades in the head of their $16 razors.

And for those playing the 'Cricket Pun drinking game', you know what to do... 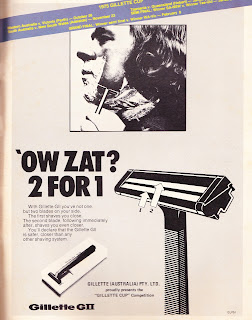 Greigy edges his way into the frame for the first time.

"Excuse me sir, do you have those shirts that Alan Knott wears? You do? I'll take one for each day of the week!" 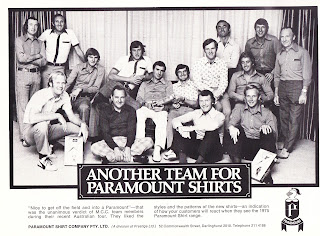 1976 - Benson & Hedges
Remember when we made our own mind up about how many hundred cigarettes we smoked per day while we watched the cricket? Another great 'cricket gear montage' here. You can almost smell the linseed oil. 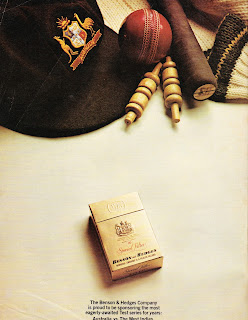 1976 - Dennis Lillee for Puma
Dennis Lillee obviously has a lifetime pass for services rendered to the defeat of England, but in recent years he has become "Dennis the Advertising Menace". He stalks us on radio, TV, everywhere; no medium can stop 63 year old Dennis from spreading the word. Hand him a cheque and he will spruik your brand.

And this is where it all began... 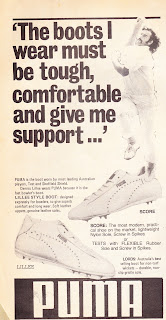 1976 - Stuart Surridge
"There is more to cricket than people realise.." says this award-winning advertising copywriter before slapping on a particularly lazy pun and calling it a day.

Sometimes I imagine what my life would be like if I'd got my marketing degree in 1976 rather than 30 years later. 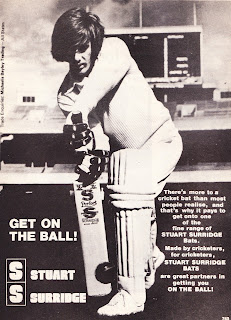 1976 - TAA Airlines for the West Indies
The best thing about this ad is imagining the kind of mayhem that occurred on these flights. Were air hostesses impregnated just by looking at Michael Holding in 1976? Someone needs to write a cricket book solely about the things that happened on these kinds of flights. 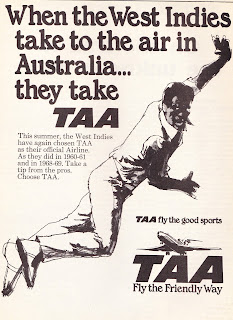 1976 - Eric Beecher decries Marketing in Cricket
Sensing a creeping commercialisation of the game, The Cricketer's Eric Beecher took it upon himself to defend the honour of cricket on everyone else's behalf. From this little relic you get the sense that if Eric Beecher were to watch one of Shane Watson's Brut ads these days, he'd end up burning all his Wisden's and throwing himself off the top of the MCC Members pavilion. 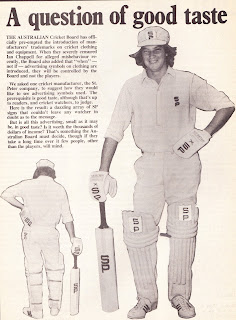 1977 - Geoffrey Boycott for Cathay Pacific
The 70's was an era of jet-setting, and nothing made the masses want to fly to an exotic Asian location like the sight of a watertight forward defense. 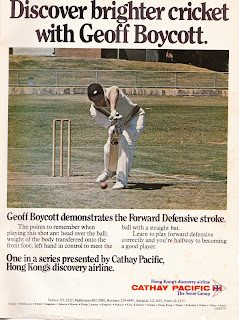 1977 - ABC Telecast of the Prudential Trophy
This ad represents the end of the era in a way. The long relationship between the ACB and ABC was about to be blown apart by Packer and broadcasting changed forever. But for now we would have, "live via satellite", cricket filmed from behind the bowler's arm only. 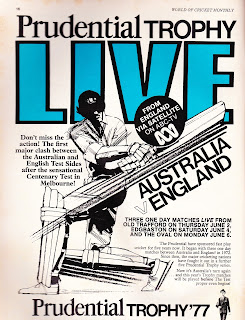 1977 - TAA Airlines
Can someone explain to me how an airline that flew 1970's cricketers around was able to stow both passengers and alcohol? 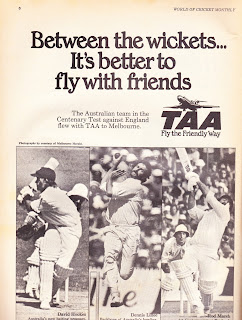 1977 - Tony Greig for St Peter
After Greigy's recent passing, many rightly pointed out that he'd paved the way for cricketers to earn a decent living out of endorsements. Here he is in full-flight for SP. As you will see further down the page, this one is pretty reserved by Tawny's standards. Like DK, Tony "got on famously" with anyone with a cheque book. There are some nice recollections of his shameless pursuit of the marketing dollar in 'The Cricket War', Gideon Haigh's essential account of the Packer era. 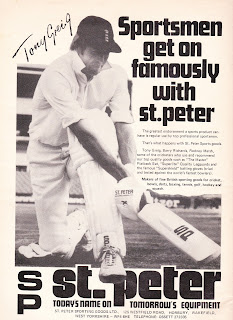 1977 - Tooheys
Rejected titles for this campaign included, "I Feel Like a Tooheys or Seventeen" and "We didn't even tell them we were filming this ad". And in Peter Toohey, they had a bloke that didn't even need to deed-poll his name to promote the brand.

It is well worth seeking out the TV commercial for this on YouTube, it's a classic of its genre, an immaculately mustached Steve Rixon in full flight. Please note, the photo below was taken during the lunch break of a Shield game in 1976. 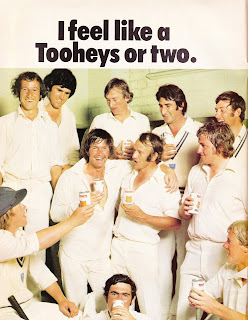 1978 - World Series Cricket
From here on in we see Cricket Marketing go from the quaint imagery of an idyllic, bygone era, into the full throttle world of Packer's PBL, where too much crass is not enough. I say that as a compliment, because the aesthetic of WSC endures in popularity even now. 'Howzat' might have ended up 'godding-up' Packer to a ridiculous degree, but there is no doubting the the retro thrill of just looking at World Series Cricket.

Now if you'll excuse me, I have to go and fill out my Cricketeers membership form... 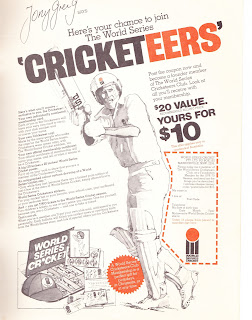 1978 - World Series Bucket Hats
How much do people love the Packer era? During the screening of 'Howzat', I did an eBay search on WSC items and someone had just paid $150 for one of these bad boys. 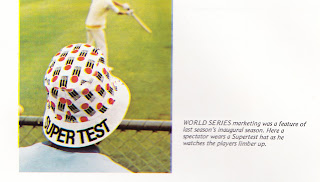 This one never looked cooler than on the head of Doug Walters, here providing Wes Anderson with the inspiration for 'The Life Aquatic with Steve Zissou'. What's also nice about this photo is that an Australian cricketer is managing to go on a boat owned by the Packer's without becoming a national hate figure. 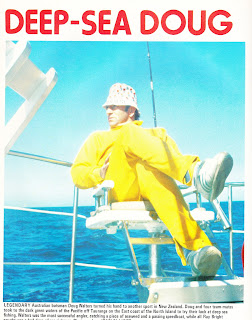 1978 - The Emergence of Helmets
World Series cricket provided us with many innovations, and the batting helmet was chief among them. It was a pretty fast evolution from stack-hat to the type of horse-riding derivative we see today, and there is lots of fun to be had with some of these early designs. I don't have an engineering degree, but the C&D one with the plastic face-guard that Kepler wears here just seems a little bit NQR. 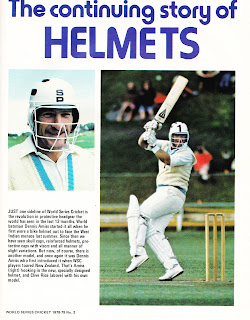 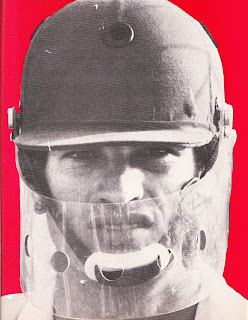 1979 - C'mon Aussie C'mon
The scene in 'Howzat' that purports to show the songwriting process for this one was a piece of champagne unintentional comedy, but there is no doubting that the jingle was a piece of evil genius. I own three different copies of it on vinyl, which is something I cannot say of any other piece of music. 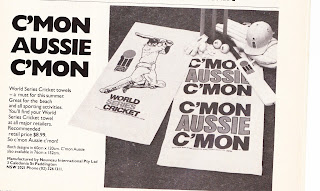 1979 - McDonald's World Series Cricket
WSC was also the era in which 'Big Junk Food' got involved in cricket for the first time. These ads are pretty cool, but there is no escaping the fact that they're the beginning of a lineage that has resulted in us being forced to watch the Madden brothers play street cricket. For this reason, these primarily serve as background evidence for the eventual crimes against humanity trial.

Kind of want to eat that Quarter Pounder though... 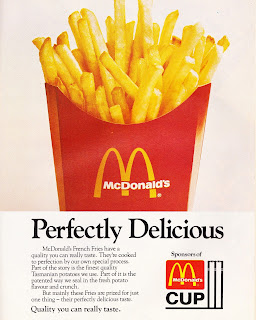 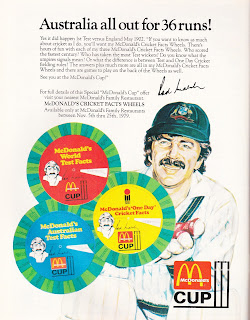 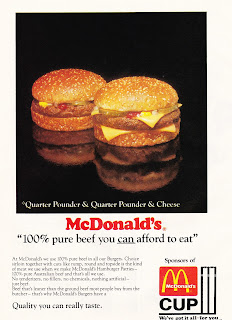 1979 - WSC Merchandise
Something worth mentioning; WSC might have commercially revolutionized the game, but that didn't mean that the ad exec's weren't so coked up that they left the copy-writing to the work experience kid. 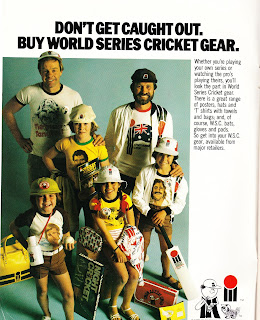 1979 - Viv Richards for Stuart Surridge
When Viv Richards leaves this mortal coil, rather than black armbands, every international cricketer should be made to bat with an SS Jumbo in their next match. It's impossible to imagine Viv batting without that thing in his hands, even given his later defection to Slazenger. 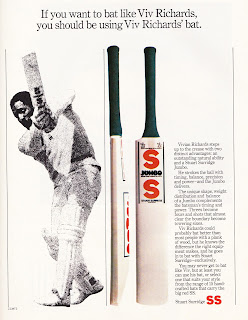 1979 - Tony Greig for St Peter
This is what you call saving your best for last. There are literally no words that can describe this ad, only questions. Was it Greigy's idea?  Does this give us an insight into his sexual proclivities? Was this the result of a lost bet? Will you ever get this image out of your head? 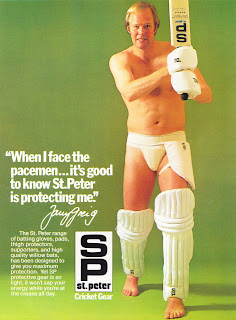 Posted by Russell Jackson at 11:23