Earlier this year, I took a stroll down memory lane and had a look at the visual history of Australian cricket advertising. To be more specific, I rifled through my Australian cricket magazine collection and just about wore out my scanner in the process.

People seemed to enjoy it (you can see those here and here and here). Well, they didn't complain so I may be filling in the gaps myself there. With all that in mind and this Ultra-Ashes year in progress, I thought I'd give the English game the same treatment. It was a good excuse to pull boxes and boxes of 'Cricketer' and 'Wisden Cricket Monthly' magazines out of  the garage and indulge in some whimsy. I found that once I'd started I couldn't stop (my girlfriend will attest to the pitiful sight she often confronted when she walked into our office, which has slowly been taken over by cricket stuff). And yes, this covers print advertising only.

To be honest, the bulk of the collection covers the 80s, 90s and 2000s (I only really have a handful of mags from before that period, hence the brevity of this post), but this first collection has a couple of goodies.

1954 - Jim Laker, Trevor Bailey and Tony Lock for Brylcream
This ad seriously  brings into question the old cliche about Brylcream ads being the domain of heartthrobs. I mean no offence to the late Trevor Bailey here, but that grin on his face is the grin of a man who cannot believe his dumb luck.

UPDATE: I realise now it is two ads in one. I apologize for the blunder and to the good people at Lucozade (I would also appreciate any merchandise they can send my way as I drink their product like it's going out of date). Just squint and pretend it's one ad for Brylcream, go with me here and don't be a bell-end. 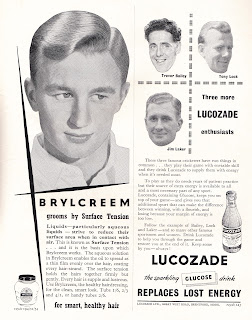 1954 - Len Hutton Grand Slam Socks
Before David Warner wowed us with his "All Day Socks" (a brilliant invention; until they appeared I was just another mug changing his socks at lunch time), the aspiring cricketer merely had to make do with Len Hutton's 'Grand Slam' cushion-foot socks.

1954 - Len Hutton for Slazenger
Speaking of Davey, I can't help but think of his ridiculously-named 'Gray Nicholls Kaboom' bat when I look at this dour vision of simpler times. 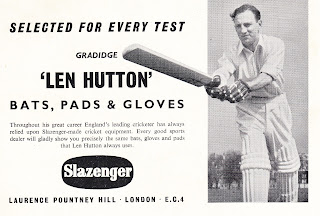 1954 - English Cricketers for Slazenger
This one just makes me want to don my smoking jacket and throw down a few cocktails. I do find it hard not to mentally superimpose Godfrey Evans' later-life mutton chops onto his face though. He looks nude without them. 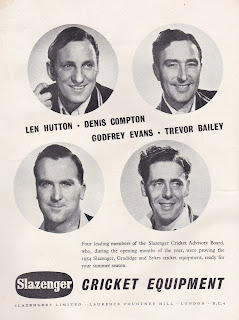 1959 - Bill Edrich Boots
If I could make a Bill & Ted style time-travel film starring Ryan Harris and Pat Cummins in the title roles (that sounds unlikely, sure), there is a sick part of me that would want them sent back to  bowl an over in these boots. I mean, is there even a 10% chance that they both wouldn't actually be pronounced dead within minutes?

I'm also almost certain that Bill Edrich would have had a test average of 50 if he wasn't hobbling around in these torture devices. 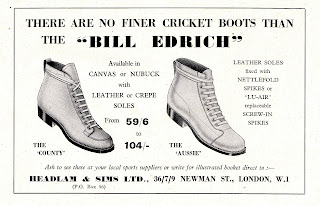 1959 - Brian Statham for Dextrosol
'Supplements' have become something of a byword for a certain type of vague dodginess in professional sport, but that wasn't the case in 1959. "Dextrosol" does sound like the kind of thing your Mum forced might have forced you to take on a sick day though, doesn't it? 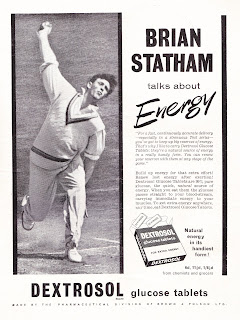 1959 - Colin Cowdrey for Gradidge
There's something about ads from the 50s and 60s that seems almost innocent and appealing. I guess it's just that, generally speaking, the advertising industry hadn't quite spiraled into a pit of slime quite yet. Just a word of warning, what follows in the 80s and 90s is decidedly less wholesome than this. 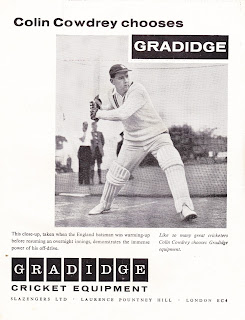 1959 - Godrey Evans for Gradidge
This one is pretty brilliant, particularly the logo. It looks like the kind of thing Saul Bass might have designed if he was a massive cricket fan. 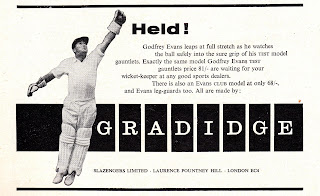 1959 - English Cricketers for P&O Cruises
I guess this would have been right on the tail-end of the period in which Ashes tourists made their journey by boat. At the risk of sounding like I'm obsessed with David Warner, if the 2013 squad had have traveled by sea, old Davey 100% definitely would've been taking random tourists on in extremely heated games of deck quoits. 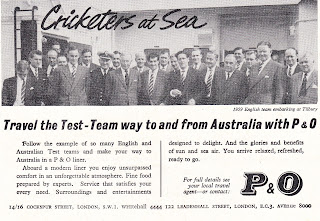 1965 - Guinness
Cricket and alcohol have always been a magnificent partnership. 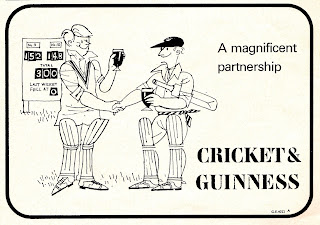 1975 - Duncan Fearnley See-through bat
"What are you looking at Bob?"

"Hate to break it to you Den, but all I can see is a very bad business decision." 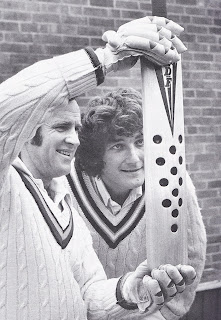 1978 - St Peter Cricket Bats
It was nice of Barry Richards to fix up his hair for this one. Looking at this, it remains insane to me that the St Peter brand hasn't made a comeback. I don't even play anymore and I'd buy one of their bats. 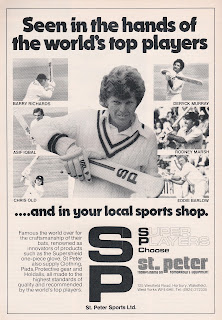 1979 - Chubb
I've previously outlined the unfortunate proliferation of bad puns in cricket advertising. It's an epidemic that is now beyond containment. Here's a tip advertising people, if you use any of the following, every cricket fan in the world resents you:
1. 'Bowl a maiden over with (insert awful product here)' (sub-tip: cricket can NEVER be sexy, don't even try).
2. "Howzat for a (insert type of deal here)?' - actually, some just go for a completely minimal and inexplicable 'Howzat?', no matter what the product is.
3. 'Let us bowl you over with our (insert desperately sad product/brand here). 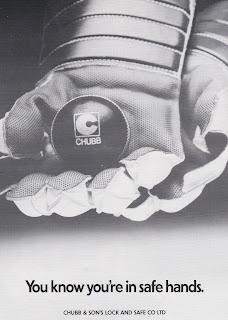 1979 - David Gower for The Daily Star
Another stroll down Pun Lane. This is also the first point at which we see David Gower, a man rivaled only by Dennis Lillee for complete over-exposure in the field of advertising and product spruiking. I doubt there is a single category of consumer products that David Gower didn't promote. At times on my search through these magazines, I felt like I was a crazed stalker rummaging through my meticulously-compiled David Gower scrapbook.

I don't actually have a meticulously-compiled David Gower scrapbook, I swear. 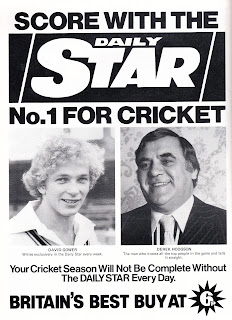 1979 - John Player League
In 1979, I can't imagine why cricket fans would have been excited by World Series Cricket in the slightest. I mean, why would you want to go and watch that technicolour abomination when you could head down to the village green and see a John Player League game played on...well...it does look like outfield, doesn't it? 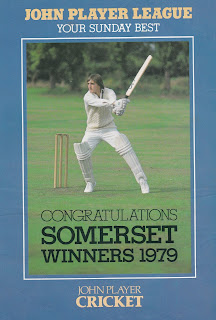 1979 - Geoffrey Boycott for Slazenger
I can only imagine that the Slazenger marketing department was overruled by the inventory manager on this one.

"Look, I don't care that we're paying Boycott to use our bats, there's 50,000 cricket balls sitting in that warehouse and we need to start shifting some units. Make it at least three times the size of Boycott." 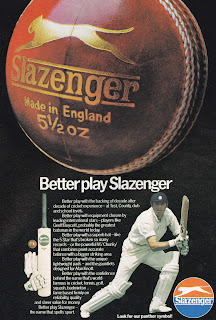 1979 - St Peter Cricket Bats
I really just put this one up for Asif Iqbal fans. 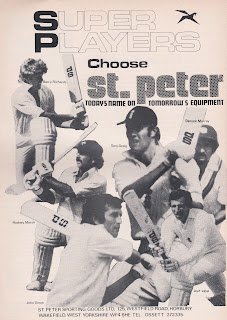 1979 - Test Match featuring Fred Trueman
If I have one cricketing hobby-horse, I have a thousand. One of these was established when  I was about 10 years old and into my fifth straight summer of giving my Test Match felt cricket game a work-out. Well, as long as the ball-bearing hadn't been blasted off the kitchen table and down one of the heating vents. My theory is this: Test Match is THE ONLY cricket board game. It's the beginning and the end of the conversation. Am I wrong on this?

I also feel like the approval of Freddie Trueman only further vindicates my theory. 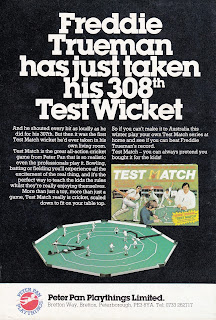 Posted by Russell Jackson at 21:17