The Worst Pieces of Cricket Memorabilia Ever

Firstly a disclaimer, good readers: I own an alarming amount of cricket books, memorabilia and tat associated with the game and thus it is a bit rich for me to be passing judgement on the people who buy the items that follow.

I have been known to return home brandishing an item that will make my girlfriend slap her palm across her face (I'm not kidding, she LITERALLY does that and somehow manages to work a simultaneous eye-roll into the one single expression of disgust. It's actually quite remarkable). 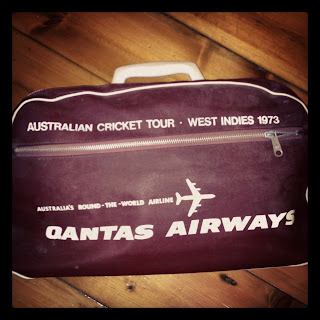 Who needs a travel bag from the 1973 tour of the West Indies to put their gym gear in? Who doesn't? I also cannot sit before you and say I haven't drunkenly bought things on eBay late on a Friday night, or gotten a bit sauced at a sportsman's night auction and bid (I think there is a theme here...) for similarly pathetic acquisitions.

Actually, I don't even have to be drunk. At one point my Dad took up wood-turning classes and for one of his first projects made my brothers and I (grown adults, one and all) a replica of the Ashes urn. It was immediately decreed we needed something worthwhile to burn and place inside it before that Christmas's "Backyard Ashes". I zeroed in on a suitably random item; Ben Barnett's wicket-keeping 'inners' used while he was back-up keeper on the 1938 Ashes tour. Post-purchase, my only job was to courier one of them down the Peninsula for the burning ceremony on Christmas day. But I forgot to, didn't I? So after a hastily convened committee meeting we resolved to burn our underpants instead and the ghosts of Ben Barnett still rest in a box in my wardrobe. In related news, yes, I am fortunate to even have a girlfriend.

But getting back to the point, Cricket memorabilia takes on many forms and there genuinely is some quite cool stuff out there, but there'll be none of that today. Today, we look at the random, the horrible, and the worst of all: the stuff that Channel Nine spend entire summers trying to sell us. So sit back and...grimace?

If there is anything I like less than a bad pun, it's a Brett Lee wicket-celebration. What does it say about you when two out of the six photos chosen to represent your career are fist-pumps?

I once took my much-younger brother to a game at the MCG at which he decided to collect all the Australian players' autographs on one of those mini bats. With limited space, the first four or five of them diligently fulfilled his request to do a small signature across the face so he could fit the whole team on. Jumping up out of his seat to collar Brett Lee, a look of horror spread across his face as Bing magnanimously snatched the bat, gave him a friendly "g'day champ", and then proceeded to sign the entire remaining surface space of the bat with a giant, illegible scrawl. The crestfallen look on my brother's face as he slumped into his seat has outlived any detail in my memory about the actual game. 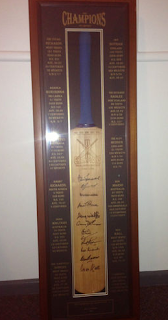 "The Champions" is a bat signed by some of the "all-time greats of world cricket." So who have we got on there? Some knighted cricketers - Richards, Hadlee, Botham, Sobers, Bedser; legends one and all. Chappell, Walters and Marsh? Yes, big tick! And then finally.... Asanka Gurusinha??? Sure he only had a Test average of 38.92, but it was the way he made them, you see. 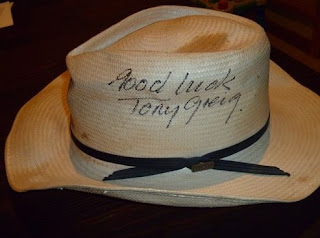 While there is a degree of poetry that a man who so relentlessly hawked dodgy memorabilia should become the subject of a piece himself, I could feasibly write an entire blog post on how wrong this thing is. I think the eBay listing for it provides damning enough evidence: "Hat was worn by Tony Greig. It even has the sweat marks. Buyer will not be disappointed." At a $500 starting bid, I think there is actually a lot of scope for disappointment if we're being honest. Did Greigy wear this while he was gardening? It seems very...soiled, don't you think?

I just thought of approximately 6 theories as to how this hat got to be in such a state and I fear it is too soon to share any of them. Okay okay, I just don't wanna get sued.

"Chappell Brothers - The Backyard at Mum's" 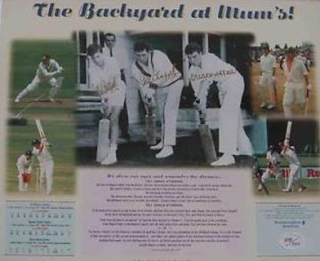 The only explanation for this piece is that it was commissioned by Mrs Chappell herself and she specifically decreed that all the boys be included so as to avoid having Trevor feel left out. Danny and Dean Waugh are nodding their heads right now...

I can imagine that if Chappelli himself was to take over the memorabilia racket left behind by Tony Greig, it would be a matter of days before we were being bombarded with limited edition Les Favell prints. 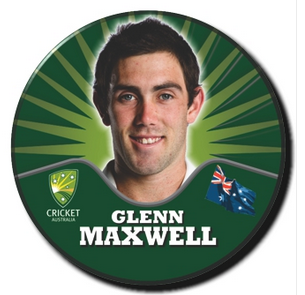 Stay with me Australian cricket lovers, I'm tipping the pin on the back of this thing is perfect for poking your own eyes out. There is also a matching "Big No-Show" magnet available, which would be ideal to slap on the side of a nuclear weapon before you position it towards the Mumbai Indians' first IPL game. 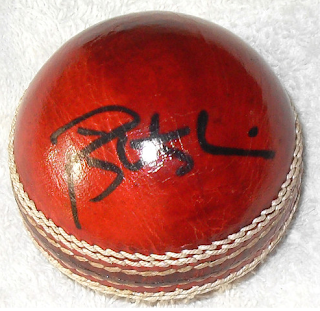 Things you can buy with 85 dollars: 17 "Stunner Meals" from Hungry Jacks, every movie that John Cazale starred in on DVD, a meat pie and a coke at the MCG, or this Phil Hughes signed cricket ball. It's actually quite a rare item in that each one takes him hours to sign; the pen just keeps flashing past manically and not making contact. This also comes with a bonus Neil D'Costa coaching DVD. Just use it as a drinks coaster like Philthy does. 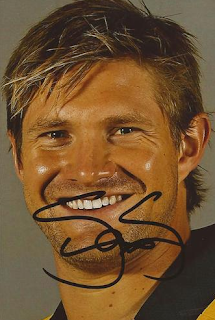 Show the cricket-lover in your life how much you hate their hobby with this Shane Watson signed photo, guaranteed to make everyone in the room wince! I often joke that Watto probably can't spell his own name and the two prominent S's here seem to vindicate my theory. You heard it here first, people. I also like that he's signed it over the most well-utilized tool in the Watson armory; his mouth. 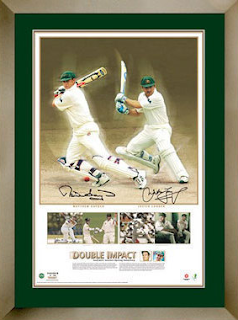 I'd like to think that the person naming this particular piece of Channel Nine 'scamorabilia' was a would-be comedian. They probably could have pushed the boat out a little further but "Double Penetration" would only have worked for a bowling partnership, I guess. If you see this hanging in someone's games room, you have my permission to go to town with a Sharpie. Get creative, too. 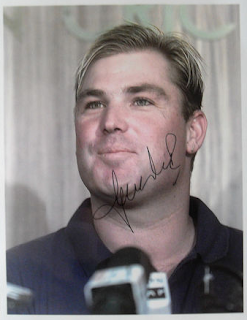 Remember 'fat Warnie'? I loved fat Warnie, he was so much more fun. And he was an ace cricketer, too. Anyway, I am borderline on buying this as a constant reminder of the good times. Its definitely not the dodgiest piece of Warnibilia out there though... 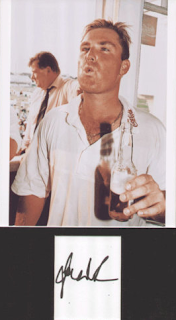 This falls into one of my favorite sub-genres of sports memorabilia; the unsanctioned piece that no athlete in their right mind would consent to. You simply take a blank piece of paper, have it signed by said athlete, then attach it to a photo or montage of their most inglorious moments. Magic. Come to think of it, Warnie would probably sign that photo, if only as a reminder of the time he used to blow smoke rings whilst drinking a full-carb beer. Come back Warnie, it's never too late.

Meanwhile, down at the Scamorabilia factory... 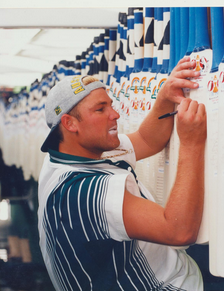 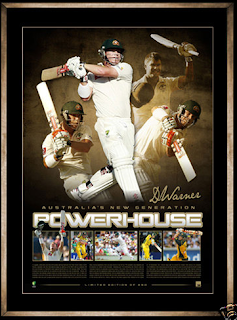 Are you sick of hearing the words "only $500 unframed" in between balls in Channel Nine telecasts? Well apparently you're not alone, because two years on, they still can't sell any of these Dave Warner 'Powerhouse' prints. And there was only 250 of the things to start with. Maybe Cricket Australia could throw one into Mickey Arthur's redundancy package? Feel free to leave your suggested uses for this monstrosity in the comments section.

"The Aussies and the Colonel" 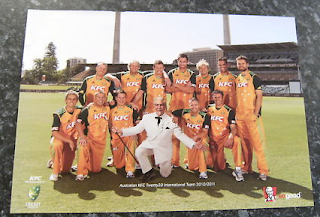 Several questions immediately popped into my head when I saw this; Was Dirk Nannes engaging in a passive display of protest by putting his hands in his pockets? Is Colonel Sanders a better middle-order batting option than Moises Henriques? Would any amount of KFC refresher towels wash the filthy stain off everyone involved in this exercise?. But then I remembered this: 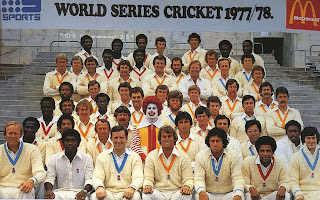 Right you are then, gents. 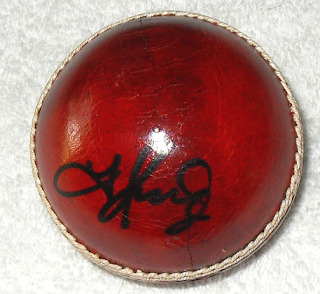 So this thing will cost you 65, exactly the same as each Jason Krejza wicket. You'd have to be a serious lover of off-spin to invest in this thing. There is no similar memento to be had for Beau Casson fans unfortunately; at the sight of a cricket ball he instinctively curls into the fetal position.

I feel a bit sorry for Dirk that this languishes on eBay with no bids despite its starting price of 99 cents. I might buy it and affix it to the title page of my copy of Dirk's book, 'Solid Knocks and Second Thoughts' a great read for lovers of the "axe-grind" genre of autobiography. 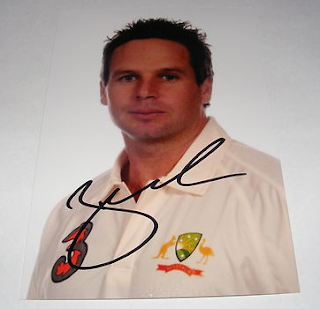 This isn't actually a piece of memorabilia that is for sale, Brad Hodge just walks around handing them out himself. 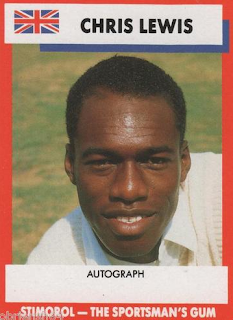 There is only one reason that this remains un-signed and that is because, technically speaking, anything that Chris Lewis touches becomes evidence. 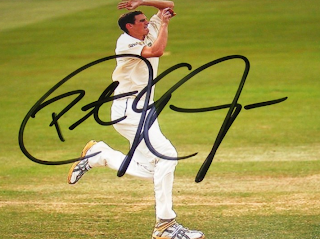 While we are on the subject of police matters, can someone get this thing down to "Missing Persons" pronto? Literally no-one has seen or heard from this bloke since he played a Test in Bangalore three years ago. History tells us that if you go missing in Adelaide it rarely ends well. 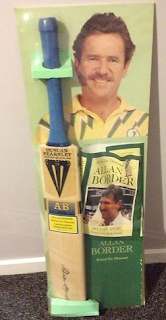 I am currently a serious risk of buying this. Somebody stop me. I'm not even kidding. This could be a relationship-ender... This book was the greatest 'limited edition" scam of all time; 10,000 in total. Get in quick before they're all gone!

Posted by Russell Jackson at 13:13